“All that glitters is not gold.”

'80s Movies: A Guide to What's Wrong with Your Parents -

It's a challenging week for Jamie Conway (Michael J. Fox): his wife (Phoebe Cates) left him, his boss (Frances Sternhagen) is on his back, his best pal (Keifer Sutherland) harangues him to party all the time, and he can't get through a day without cocaine. 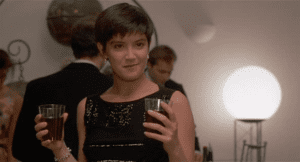 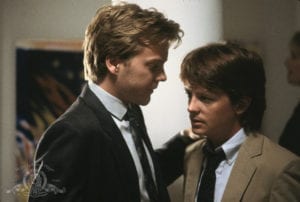 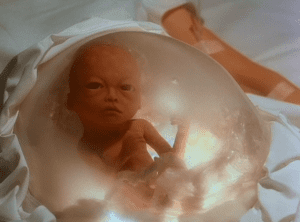 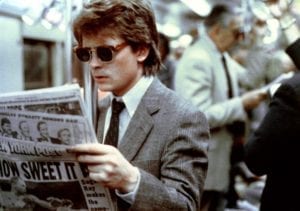 Based on the best-selling Jay McInerney novel, Bright Lights, Big City depicts the glamorous, hedonistic New York nightlife of the 1980s in all it's excess. 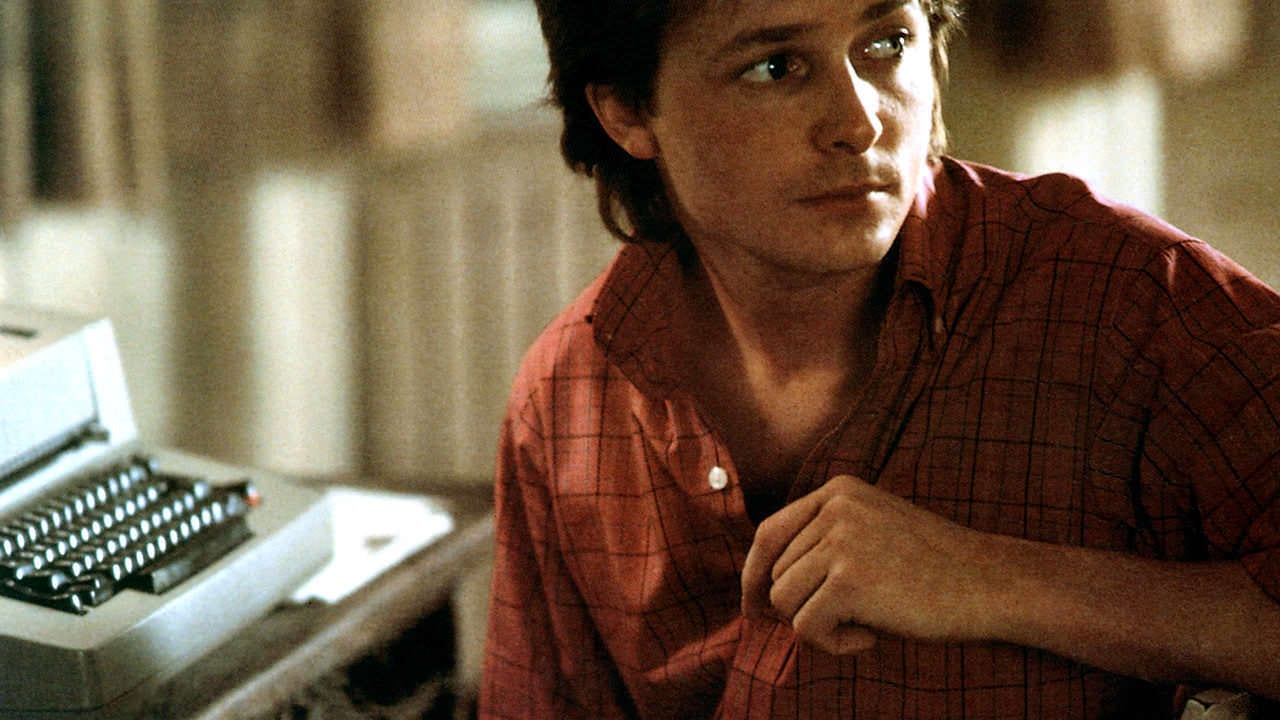 In the ‘80s, sex, drugs and rock n roll weren’t just for rock stars – it was the Big City lifestyle in America. The novel was published in 1984, a time when people hadn’t quite realized that cocaine addiction could – and would – ruin the lives of so many and AIDS hadn’t hit the zeitgeist as a reality that would put the brakes on casual sex.

Conway is a fact checker for “Gotham Magazine,” clearly a stand-in for the prestigiously stuff New Yorker. It reflects the last gasps of the importance of accuracy and truth in journalism. With the rise of the internet, salaciousness and bias in reporting that began in the 1990s, Jamie Conway’s job is now a sad reflection of how much truth mattered – not to mention, grammar and sentence structure.

This is a story about a young aspiring novelist who is so coked up, he loses sight of his wife, his job and his ambitions. He’s literally losing everything. Yet, the film – as viewed by today’s eyes – doesn’t show the cocaine as the cause as much as a by-product of his downward spiral. Maybe that’s because in the early 1980s, the party was the priority for youth.

Jamie types his novel on a typewriter – remember 1984 was the year The Apple Macintosh commercial came out. Everyone having a desktop computer in their house was not yet a reality – and writers, in particular, loved their typewriters.

The Coma Baby is an example of the kind of tabloid headlines the New York Post is famous for…and the “coma baby” special effects is pretty artificial these days, but this is a decade before Ally McBeal’s “dancing baby” – this was the height of special effects!

In Jamie's apartment, he has a cassette deck in his stereo system and shocking, experimental statement art on the wall.

Amanda is a model for a designer that sums of the '80s: Oscar de la Renta. Check out those shoulder padded dresses!

In the club and party scenes, notice all the perms. And cigarettes.

Cocaine, all the cool kids do it. Jamie’s life is going downhill. Maybe he couldn’t save his marriage or his ailing mother, he could certainly have saved his career. While it’s obvious to the viewer that the late night partying and the 24/7 cocaine and alcohol abuse is strongly contributing to the demise of his reputation, Jamie never seems to draw that conclusion. By movie’s end, he admits he has to “learn everything all over again.” However, he never denounces the cocaine or even has an observation – other than choosing not to snort it when spending time with a college student he feels a connection with. The New York Times review from 1988 calls the depiction “admirably non-judgmental.” This is the difference between '80s movies and movies in the 2010s.

One of Bright Lights, Big City’s biggest missteps is placing the story in the present, 1988. Filmed in 1987, the story was already dated. In the 1980s, cocaine use was trendy among the rich, successful and fashionable. Scholars Stephen Hilgartner and Charles L. Bosk said cocaine had reached “celebrity status.” The year 1985 seemed to be the height of the drug and club era. However, late 1985 also marked the public introduction of cocaine’s ugly cousin, crack. Crack was instantly recognized as detrimental. In 1986, public sentiment turned and concern grew. By 1989, 64 percent of Americans said drugs were the country’s primary problem. So, by the time the movie came out, 1988, drugs and clubs were comparatively over. Of course, it’s impossible to judge history while you’re in the midst of it, so how could the filmmakers recognize this? It would seem insane to take the hottest, contemporary piece of literature and make it into a “period” piece four years after it is published.

Therefore, the biggest facepalm of this film is that by 1988, viewers knew the pain that came with the excess of the hedonistic early '80s. For drugs, it could mean addiction, the occasional death, folks running out of money to support their drug habit, losing their credibility in the workplace, etc. For sex, we now had AIDS to answer to, and that stopped casual sex in its tracks.

Where Jay McInerney fell short in adapting his own work – which, as a first time screenwriter, who can blame him – was to the make his second person voice in the novel work for the film. The book’s narrator refers to himself as “you.” This device is used, although not heavily, in the film. It’s brilliant because it allows the reader to draw the conclusion that “you” – a good guy from the Midwest trying to succeed in the big city – is in trouble...and it allows the reader to see themselves as “you,” as well. Therefore, if the device had been successfully employed in the film, the viewer could see how they might make the same mistakes as Jamie. But, this doesn’t happen. That could be because 1980s movies delivered stories, but rarely messages. 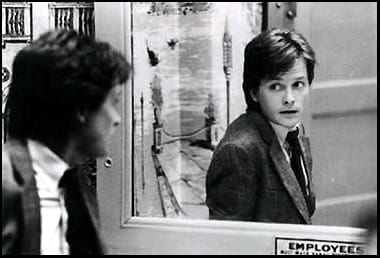 Getting the film made was a struggle. While the rights to the film were snatched up immediately after publication, it passed through three studios:

o  First, it was at Columbia with Jerry Weintraub (The Karate Kid) assigned to produce, Joel Schumacher (St. Elmo’s Fire) signed to direct and Tom Cruise (Risky Business) tapped to star. Author Jay McInerney rewrote the script but had a hard time capturing his own voice, Schumacher worked on rewrites. Cruise, McInerney and Schumacher even went clubbing one night in New York for research purposes.

o  Then, the project moved to United Artists when Weintraub was hired to run the studio. He reassigned his producer role to Sydney Pollack (Tootsie), who hired a new screenwriter, Julie Hickson – known at the time as Tim Burton’s girlfriend who’d written the TV movie “Hansel and Gretel” and co-wrote Burton’s original Frankenweenie.

o  Weintraub left his job at United Artists and the rights to “Bright Lights, Big City” were caught in a legal battle between the two. It wasn’t until 1986 that it was clear ownership belonged to UA, Weintraub out. In the meantime, Cruise and Schumacher had moved on to other projects.

o  With only Fox’s summer hiatus from his hit TV sitcom “Family Ties” to shoot, Chopra had 10 weeks to complete all the filming. Concerned with making sure the exterior shots matched New York in the fall, she spent a month filming Fox walking. She shot other things, too, but apparently there was a LOT of time spent on Fox walking through New York, which caught the ire of the studio. She was fired, as were Cole and

o  James Bridges (Urban Cowboy, was hired to direct. With the threat of a Directors Guild of America strike on the horizon, Bridges rewrote the script based on the novel in one week, recast six actors and shot the film in its entirety in six weeks.

o  Sydney Pollack really didn’t like the drugs in the story. So, he secretly ordered writer Tom Cole to take them out of the script. When James Bridges took over, he started the script from scratch, based on the novel. Drugs, in.

o  Chopra’s leadership style rubbed Pollack and the studio the wrong way. They didn’t like – or didn’t understand – her collaborative decision-making style, working with her husband and cinematographer to decide which shots to get and allowing the actors to figure out their scenes, instead of instructing the talent and crew on what to do. In retrospect, some consider it a form of sexism.

o  After Chopra was fired, the crew wore T-shirts with a shoe in a red circle and a line through it – meaning no more “shoe leather” aka walking shots. 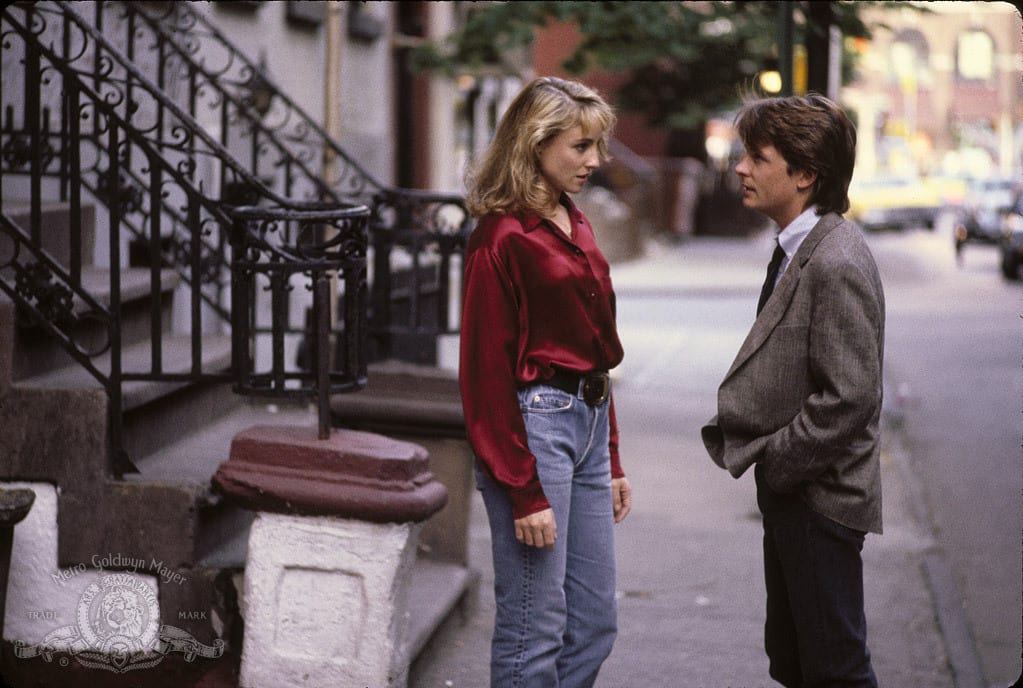 The filmmakers insisted over and over to the New York Times that Bright Lights, Big City movie was NOT about “drugs and clubs.”

Pollan made an impression on Fox after her character arc was over on “Family Ties.” According to Fox, he was acting every bit the Hollywood big shot he was: spending obscene amounts of money and partying with A-list celebrities. Pollan played him the James Taylor song, “Why I’m Here,” which he remembered. As he later told Oprah, When he was recasting the role of Vicky in Bright Lights, Big City, he asked about her boyfriend, Kevin Bacon. She said, "We're not together anymore." I was like, "(a) You have the job and (b) let's have lunch." By the time the movie was finished, we were on vacation together—and less than a year later we were married.

Emilio Estevez met with McInerney to try and obtain the option. He failed.

This film earned David Hyde Pierce his SAG card (the industry term for membership to the Screen Actors Guild, required for most studio films and TV shows). As “Bartender at the Fashion Show,” he has one line: “Sorry, the bar is closed.”

Phoebe Cates is billed as one of the three leads, but in reality, her only lines are during one flashback scene where a plaster cast is being made of her head and one line in one of the final scenes, where she too simply says: “How's it going?"

Bright Lights, Big City soundtrack nails exactly what one would hear in the coolest, edgiest '80s nightclubs (you couldn't escape a night of dancing without hearing "Pump Up the Volume"). The song released from the soundtrack was Donald Fagan's "Century's End." Not included on the official soundtrack is a Fagan cover of the song, "Bright Lights, Big City" which runs under the film's final scene.

Opening Weekend Rank: #3 (Beetlejuice was #1 and the other new release was The Seventh Sign at #5).